It’s rare that a comedy sketch is so twistily ridiculous that it requires a spoiler warning, but in the spirit of the holidays, I’d lovelovelove if you watched Netflix’s recent Michael Bolton’s Big, Sexy Valentine’s Day Special before reading any furtheror, at least, got past the 20-minute mark, by which point you’ll have seen the 63-year-old singer deadpan his way through a version of Bob Seger’s “Old Time Rock and Roll.” RecappingwhyBolton does this is both a time- and fun-suck, but for those who don’t have the time to check it out, here goes: While hosting a cupid-themed telethon, Bolton is suddenly razzed by a group of punks for being uncool; in response, he jumps into astraight-faced rendition of “Rock and Roll,” set in a cornball ’50s diner populated by shades-sporting dancers and giant framed photos of guitars. Midway through the performance, though, we cut unexpectedly to a rehearsal sequence where Bolton and his dancers being are barked into shape by a gruff, chain-smoking Fosse-esque choreographerplayed by Michael Sheenwho frantically (and accurately) warns Bolton to be prepared, because the punks “will always show up.” 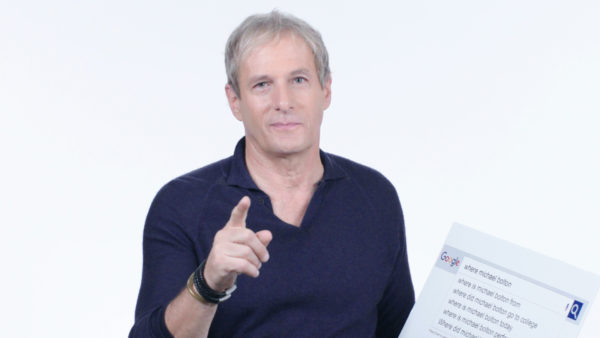 It’s a great sketcha little bit stupid, a little bit smart, but mostly just happily stupid-smart. And though Here’s Why This Is Funny explainers are a guaranteed drag, it’s worth pointing out that, while there are numerous reasons why “Rock and Roll” worksthe kitsch-perfect production design, Sheen’s nicotine-spittled monomaniaall that jazz wouldn’t mean anything without Bolton, who gamely surrenders himself to the proceedings, and winds up giving the show’s most effective performance. Which is surprising, partly because he’s Michael Bolton, and partly because, for the last two decades, we’ve been conditioned to think that the only way celebrities can incorporate themselves into comedy is by either becoming easy punchlines (I’m With Busey, ugh) or by playing jerkier, image-subverting versions of themselves (a semi-recurring plot-ploy on such shows as Larry Sanders,Curb Your Enthusiasm, and Extras).

But throughout this hour-long spoof, Boltonwhose comic chops were first hinted at with his Lonely Island-assisted “Jack Sparrow” anthem a few years backis neither hostage nor ham. Instead, he exudes a sort of knowing, zen-like, trapezoidal squareness; imagine Batman-era Adam West after a single scotch and an hour in the hot tub. And while Sexy certainly caters to his strengths at times (he performs a number of songs, including ’90s hits like “How Am I Supposed to Live Without You?”), and occasionally pokes fun at his Clinton-era coif, for most of the special, Michael Bolton can’t just cruise along being Michael Bolton. Instead, he plays a straight-man-in-a-strange-land version of himself, whether he’s hunting for Cialis during a VR-sex escapade, casually wielding a firearm, or giving an earnest tour of his love nest (“designed by clinically insane Swedish architects to encourage optimal lovemaking”).

It’s an irony-free, cruelty-free career-recalibrationand it works especially well in a show like this, which employs Bolton as a sort of bemused wanderer, giving you just enough ace-timing reaction shots and random-croon out-bursts (“Snuggle!”) before the novelty wears thin, and surrounding him with increasingly goofy sketches featuring the likes of Will Forte (playing Michael Fulton, Bolton’s failed twin brother), Andy Samberg (a vengeful Kenny G), and Sarah Silverman and Randall Park (a pair of cheerily bawdy lovebird-songbirds in what feels like a spiritual successor to SNL‘s exquisite“T.T. and Mario” sketch).

Sexywas created/produced/directedby Lonely Island and Comedy Bang! Bang!‘s Scott Aukerman, two of modern comedy’s most reliable cameo-cajolers, so they were bound to bring in a few big-name guest stars.What’s really unexpected is that, in doing so, they also managed to temporarily revive the variety show formata task that’s befuddled everyone from Neil Patrick Harris to Rosie O’Donnell to Maya Rudolph and Martin Short. As it turns out, all you need to make ’em work is some Fosse references, a few erection gags, and a host who’s up for anything. That’s not to say that Netflix shouldn’t look atSexy‘s success as a reason to get into the song-and-dance business. But if it wants to make Bolton’s wry, weirdo love-in a holiday ritual, this punk will show up.